Synchronization using patterns of peaks in the impurity data

When data from more than one ice core is available in a certain time period, it is often very helpful to synchronize the ice cores during the dating effort. In this way, the accuracy of the dating can be improved and the time scale can be applied to both cores at the same time, greatly improving the value of the data for investigating the dynamics of past climate.

Synchronization can be achieved by matching layers of high acidity or high impurity content in the cores. Volcanic layers are more acidic than the surrounding ice due to the large amount of sulphuric acid generated in the atmosphere by the release of sulphate from volcanic eruptions. By measuring the conductivity of the ice, it is possible to detect the acidic volcanic layers as peaks in the conductivity profile, and these peaks can be used to align the ice cores (see the top section of the figure below where [H+] denotes the ice acidity derived from conductivity measurements).

When two or more cores have been synchronized in a certain interval, it is possible to carry out the annual layer counting in all cores simultaneously, using that the same number of annual layers must be present in the same interval in all ice cores (see lower part of the figure above). In this way, the counting can be based on many parallel, independent data profiles, and the approach thus reduces the dating uncertainty and provides ice core records that are reliably synchronized. When annual layers were counted for the construction of the GICC05 time scale, parallel dating was performed as outlined above wherever data were available. 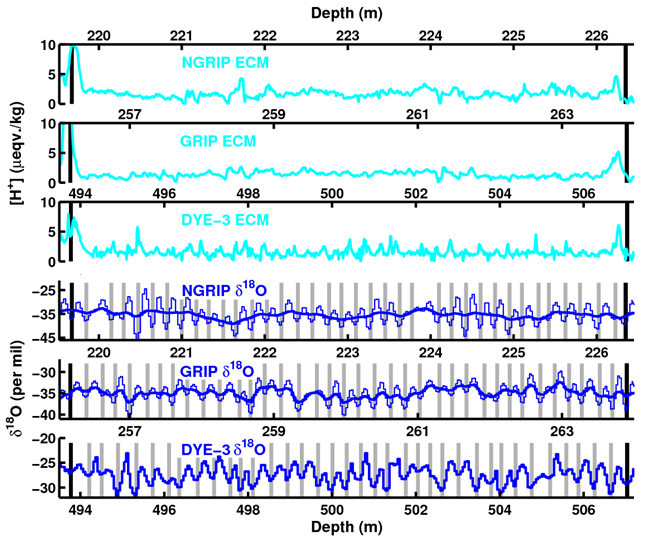 Synchronized records are very valuable when investigating the climatic signals in the ice cores, because small differences in the climate records can be reliably interpreted, and because small differences in the timing of past climate shifts may give important hints about the dynamics of the climate system. Even when data are not available for year-to-year synchronization, impurity data can be used to align several ice cores that then can be studied on a common time scale with decadal precision. Below, an example from such a matching effort (Rasmussen et al, QSR, 2008) is shown. 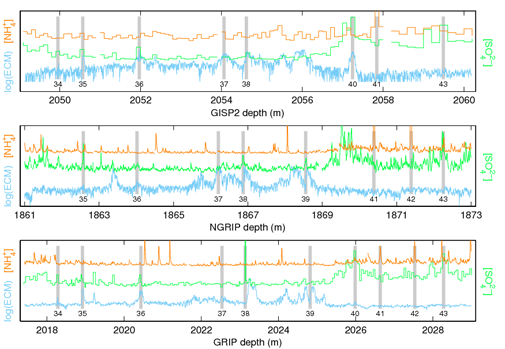 Section where the GRIP, GISP2, and NGRIP ice cores have been synchronized. The ECM (conductivity), [SO42-], and [NH4+] data series are shown together with the match points (numbered). The ECM peaks appear less well defined because of the logarithmic axis. Match point 34 has only been found in the GRIP and GISP2 records, and match points 40 in NGRIP and 39 in GISP2 have not been set because their positions within the wide [SO42-] and ECM peaks are uncertain. Number 42 cannot be set in GISP2 because it is based on [NH4+] data, which are not available for the GISP2 core in sufficient resolution.