10Be is produced from the interaction of the cosmic rays with the atmosphere. The 10Be production is governed by changes in solar activity and the Earth's magnetic field which modulate the incoming cosmic ray intensity. The 10Be particles typically remain in the atmosphere for 1-2 years before they are deposited on the surface of the Earth, and thus also on the ice caps. Due to the short lifetime in the atmosphere, large variations in the 10Be production are recorded as synchronous events globally.

Therefore, ice core records can be synchronized using measured profiles of the Beryllium-10 (10Be) content. The method is especially powerful for linking ice cores from Antarctica and Greenland because the 10Be signal is a global signal that is recorded simultaneously in both hemispheres. Events of high atmospheric 10Be production rates in the past are recorded in the ice cores as peak values and can be used for synchronizing the cores. An important link between Antarctic and Greenland ice cores is the prominent geomagnetic excursion known as the Laschamp event that took place approximately 41,000 years ago, which caused approx. double 10Be production rates and which is clearly visible in the 10Be records.

Compared to the CH4-matching method the 10Be method has two main differences: The 10Be is measured on the ice itself, not the bubbles (which means that we avoid problems arising from the age difference between the ice and bubbles) and the 10Be production is not dependent on climate. The drawback is that a lot of precious ice core is needed for each sample, making it hard to obtain high-resolution data series. 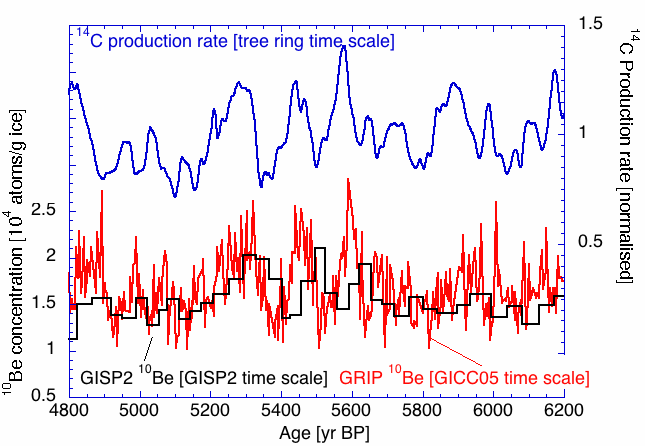 The figure shows an example of how solar activity variations are expressed in ice core 10Be and tree-ring 14C data and how these can be used to synchronize time scales.