For detailed comparison of ice core data from different sites it is important to synchronize the records in order to put the records on a common timescale. This is particularly tricky when working with ice cores from both Greenland and Antarctica, because there are very few reference horizons of e.g. volcanic origin that can be found in both hemispheres and used for the synchronization. Instead, one can use the fact that the atmosphere is relatively well-mixed, so that the bubbles in ice cores from Antarctica and Greenland have roughly the same concentration of e.g. methane. The methane (CH4) concentration has changed abruptly in the past, and records of these changes can therefore be used to synchronize the ice cores.

Methane data from Greenland and EDML, Antarctica. Apart from a small interhemispheric difference the records show the same characteristics. 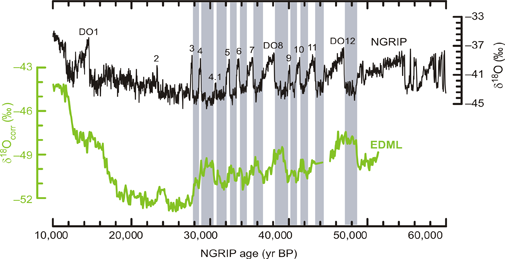 Water isotope data from Greenland and EDML, Antarctic (representing temperature changes). The records have been synchronized over the methane records.

When using variations in the methane concentration in the bubbles for synchronizing ice cores, the main complication is that the age of the gas occluded in the ice is not identical to the age of the surrounding ice. As most of the climatic information from the ice core is retrieved from measurements performed on the ice itself rather than the bubbles, the age difference between ice and air must be taken into account. This age difference is called Δage (pronounced "delta age") and results from the gas being occluded not on top of the ice sheet but in a depth of roughly 80 m below surface. The values of Δage depend on temperature and snow accumulation rates at the ice core drill site and range from a few hundred up to a few thousand years. Δage can be calculated with a firn densification model, but especially for sites where Δage is high due to a combination of low temperatures and low snow accumulation rates, the uncertainty can be several hundred years (read more about the transformation of snow into ice here).