Ice cores from Greenland contain information about climate changes in the past over the Greenland ice sheet and the surrounding areas. Likewise, cores drilled from the sea bed or from the sediments in a lake tell about past temperatures and other climate indicators in the oceans and over continents. The different cores all give their story of the climate of the past from their respective geographical locations, and they agree on one thing: Climate has always been changing. On millennial time scales, the climate oscillates between cold and warm periods. However, one question which is still under investigation is to what degree the climate oscillates in phase all over the Earth or whether there are regional differences during climate shifts. Solving this question is hampered by the uncertainty on the dating of the different records. The absolute age along an ice core or sediment core can never be given with 100% accuracy. Because of the uncertainty on the dating of the cores it is difficult to compare the climate profiles and investigate whether climate change happens synchronously or transgresses from one region to the other.

To deal with this problem, researchers are looking for reference horizons that can be used to link ice cores with other archives of past climate so that the records can be compared directly without the need to worry about time scale differences.

Essentially, there are two types of reference horizons: ash layers and 10Be peaks.

If we can find an ash layer with the same chemical fingerprint in an ice core and in a sediment core from the sea or a lake, we can conclude that the ash originates from the same volcanic eruption. Hence, this layer must have the same age in all the cores and, hereby, we can link the climate profiles together using this layer. The more ash layers we can find in the cores, the better the cores can be linked and the better we can compare the climate profiles in order to interpret how the climate system in the past has worked.

You can read more about the methods used to locate and analyse the ash layers in the ice cores here.

Linking ice cores and tree-ring chronologies through beryllium-10 and carbon-14 records:
Beryllium-10 records from ice cores (read more about 10Be analysis of ice core samples here) can also be used to link ice cores with tree ring chronologies. The method uses that the atmosphere's Carbon-14 (14C) and Beryllium-10 concentrations share a common signal. The fundamental idea is that the production rates of 14C and 10Be vary in the same way because the two isotopes are produced by similar processes in the atmosphere. However, the method is complicated by the fact that the 14C concentration of the atmosphere also is influenced by changes in the global carbon cycle (e.g. variations in the uptake of carbon in the oceans). Therefore the 10Be-14C synchronization involves a modelling step to account for the influence from the carbon cycle on the 14C concentration. Often, the comparison of the 10Be and 14C records is performed by converting the 10Be data into values of past atmospheric radiocarbon concentrations denoted Δ14C and comparing these with Δ14C measured in tree rings. The matching is illustrated in the figure below. 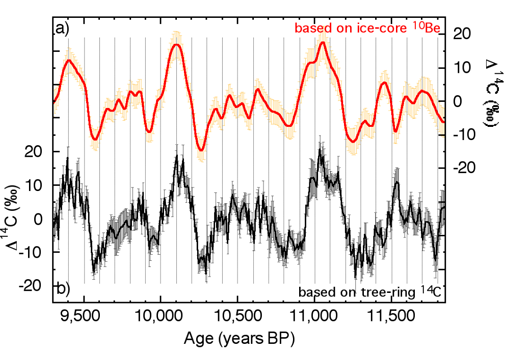 The similar pattern in the reconstructed past atmospheric radiocarbon concentrations (Δ14C) from ice core 10Be data (red) and tree-ring 14C data (black) can be used to provide a direct time-link between ice cores and tree rings. Modified from Muscheler et. al (2000), Nature, Vol. 408.