Snow is slowly compressed into ice in the upper 80 meters of an ice sheet (read more about the process here). During this process, water vapour can move relative to the ice in the open pores between the snow grains, thereby smoothing the annual δ18O cycles. This diffusion process smoothes the δ18O signal and even erases the annual signal if the annual layers are thinner than 15-20 cm. In ice cores from sites with less than 15 cm of precipitation (measured in equivalents of compacted ice, not snow) per year, the annual cycle in δ18O will be obliterated, and dating based on annual δ18O oscillations is therefore not possible. This is the case for areas in north-eastern Greenland where the annual precipitation rate is significantly lower than 20 cm. For ice cores drilled in areas with about or slightly more than 20 cm of precipitation, diffusion will also blur the annual cycles, but it is possible to retrieve the annual cycle using diffusion correction techniques.

Very slow diffusive processes also take place deeper in the ice sheets. These processes slowly weaken the annual δ18O oscillations as the ice gets older and the layers thin due to the flow of ice.

Due to the diffusion processes, the limit of safe annual layer detection using δ18O / δD measurements is about 8500 years ago in the DYE-3 ice core. More favourable conditions at the summit of the Greenland ice sheet has permitted successful identification of annual layers from δ18O data in more than 14,000 year old ice from the GRIP ice core, while the NGRIP and NEEM ice cores cannot in general be dated using δ18O data alone.

The curves on the figure below illustrate the effect of diffusion. The three sections each show about 26 years of data 1000 years apart (the sections are from 6000, 7000, and 8000 b2k, "b2k" meaning "years before A.D. 2000"). It is seen how the amplitude of the annual peaks is reduced for the older sections, and how neighbouring peaks begin to merge in the oldest section. 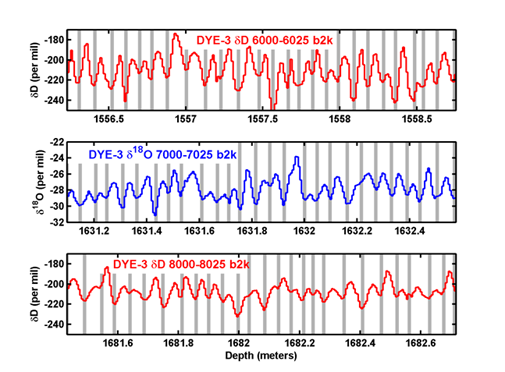 The annual cycle of δ18O and δD values in Greenland ice cores is slowly smoothed by diffusive processes in the ice as time goes by. The above figures show how the annual peaks are dampened from 6000 b2k to 8000 b2k in the DYE-3 ice core (b2k is a short for before A.D. 2000). Grey bars mark winter minima. Note that the top and bottom curves show δD data while the middle curve shows δ18O data. However, the scales of the curves have been adjusted so that the curves can be readily compared.

In the early Holocene parts of the GRIP ice core, diffusion has weakened the annual signal in the δ18O record so much, that the annual peaks appear to be gone. However, because the nature of the diffusive processes is well known, one can mathematically correct for the effect of diffusion and restore a lot of the original record. The example below shows a section of data from the GRIP ice core where annual layers have been identified using impurity data (read more here). The grey bars show the annual layer markings, and the δ18O data are shown at the bottom (thick grey curve). It can be seen that the curve no longer contains clear annual peaks, but that the annual peaks re-appear after the diffusion correction has been performed (thin grey line).

Impurity and stable isotope data and annual layer markings (grey vertical bars) from the GRIP ice core, about 8.8 kyr b2k. The annual layers are identified as matching pairs of spring and summer indicators: spring is characterized by high dust content, leading to peaks in [Ca2+] and dips in the [H2O2] curve, while summer is characterized by high [NH4+] and corresponding minima in the ECM curve. Note that the ECM and [H2O2] curves are plotted on reversed scales. The annual layer identification is supported by high-resolution δ18O data that show clear annual peaks when corrected for the effect of diffusion using the method of Johnsen [1977] and Johnsen et al. [2000] (raw data: thick line; diffusion corrected data: thin line).