Fractionation and temperature: why do δ18O and δD reflect temperature?

In the 1950s, Willi Dansgaard investigated the relationship between the mean annual temperature and the δ18O of precipitation at a large number of locations worldwide. He found a close correspondence in modern samples of precipitation, and it is believed that this relationship holds in the past, at least qualitatively.

The main reason for this is the basic fact that the maximum amount of moisture that air can hold drops with decreasing temperatures. When humid air cools, at some point the water molecules will condensate to form precipitation. As the heavier isotopes have a slightly larger tendency to condensate, the humid air mass will gradually lose relatively more and more of the water molecules containing heavy isotopes (18O and Deuterium; D or 2H). Every time precipitation forms, the air mass will become more depleted in heavy isotopes. In the language of physics, fractionation takes place. During cold conditions (e.g. during winter or in a cold climatic period), the air masses arriving in Greenland have cooled more on the way, thereby having formed more precipitation and the remaining vapor is therefore more depleted in heavy isotopes (corresponding to lower δ18O vales). 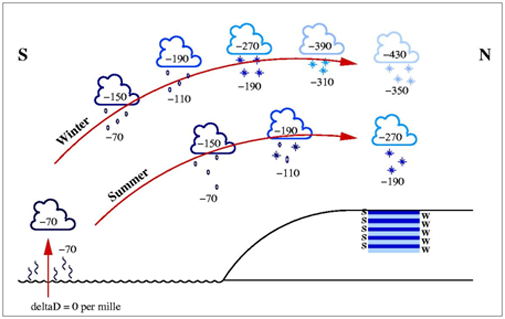 The annual cycle of δD values in Greenland snow and ice is due to seasonal changes in the amount of rain-out experienced by an air mass on its way to Greenland. Summer and winter layers can therefore be distinguished in the ice core by measuring δD of ice samples.

An example of how the air masses are depleted on their way to Greenland in summer and winter, respectively, is shown in the figure above. The Deuterium depletion (given as δD values of the clouds and precipitation) depends on the amount of water that has rained out of a cloud (illustrated here by the number of times precipitation forms below the cloud). In this way, the δD values reflect the level of rain-out from the air mass, which correlates with temperature. Given the complex nature of the physical relationship between δD (or δ18O) and the temperature at the precipitation site, it may seem surprising that the observed correspondence between the two parameters is so strong, but nevertheless, δ18O remains the most robust and widely used proxy for past temperatures.