Past Greenland temperatures and moisture sources

Ice consists of water molecules that come in different varieties with slightly different masses, so-called isotopes. The amount of each of these isotopes in a certain ice sample depends on the formation history of the ice: Under which conditions did the water evaporate, and how much cooling did the vapour experience on its way to the ice cap before forming the precipitation that ended up as the layers in the ice cap? Information on the temperature and moisture sources is therefore stored in the isotopic composition of the ice.

Molecules of water (H2O) consist of two Hydrogen atoms (H) and an Oxygen atom (O), and each of these atoms may be one of different isotopes of H and O. Most hydrogen atoms (1H) have just one proton in the nucleus and weigh one atomic mass unit, while a few have either one or two extra neutrons in the nucleus (2H and 3H), making these atoms heavier than the most common 1H isotope. Similarly, oxygen atoms come in three isotopes; the common 16O and the more rare heavier isotopes 17O and 18O, having 8 protons and 8, 9, or 10 neutrons in the nucleus, respectively.

Three different water molecules formed from 2 hydrogen atoms and different oxygen isotopes (similar, but with different number of neutrons in the nucleus). The most common form is H216O. For each 10,000 water molecules in nature, only 3 are H217O and 20 are H218O.

In climate studies, especially the fractions of the water molecules with either one 18O or one 2H are measured (read more about the measurement techniques here). In general, there are less of the heavy isotopes 18O and 2H (also called deuterium, or D) in ice formed under cold conditions. The amount missing is very small, and for practical reasons, the measured amounts of 18O or 2H are given as the so-called δ18O (delta-O-eighteen) and δD (delta-Deuterium) values. These values are usually negative and range roughly from -80‰ to 0‰ for δ18O and from -600‰ to 0‰ for δD. One per mille of δ18O (or 8‰ of δD) corresponds to a temperature difference of 1.5-4°C.

The δ18O and δD values are used as indicators of past temperatures, so-called temperature proxies. From analyses of the isotopic composition of Greenland ice cores it is possible to obtain a record of past Greenland climate reaching more than 100,000 years back in time. For the past 8,000 years it is even possible to follow the annual temperature variations year by year in the isotope records. 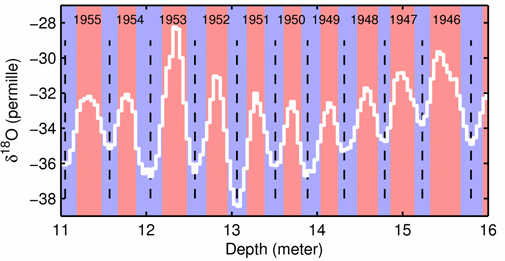 δ18O values from the Greenland Crête shallow ice core. The annual temperature variation is clearly seen in the record. The data both show warm/cold seasons and can be used for dating because the annual layers can be identified and counted starting from the surface.

But the isotopes also tell about the climatic conditions in the areas from which the moisture source originates. Roughly speaking, the δD values are 8 times the δ18O values because the relative mass difference between D and 1H is 8 times bigger than the mass difference between 18O and 16O. However, the difference δD - 8 ⋅ δ18O (called the Deuterium excess) varies and also carries information about the climate conditions of the moisture sources.

Read more:
- Isotopes and the delta notation
- Fractionation and temperature: why do δ18O and δD reflect temperature?
- Isotopes reveal changing moisture sources at the end of the glacial
- Isotope measurements as basis for dating ice cores
- Methods for measuring water isotope ratios