During glacial times the amount of dust that reached Greenland was 10-100 times greater than in the present interglacial, but the composition of the glacial dust is basically the same as that of today's dust. This tells us that the Greenland dust sources have largely been constant over the last glacial cycle, but that the winds were stronger and that particle wash-out in the atmosphere was much less efficient during glacial times. So the glacial period was not only a lot colder than today, it was also a lot more windy and dustier at high latitudes. 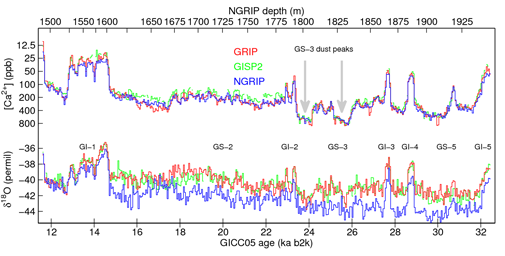 Concentration of Calcium ions ([Ca2+], essentially a measure of the dust content) and the δ18O values of three Greenland ice cores in the time interval from 32 to 12 thousand years before now (“ka b2k” means thousand years before AD 2000). Note that the [Ca2+] scale is logarithmic and upside-down. The δ18O curve below reflects temperatures in Greenland, and it can be seen that [Ca2+] is 3-500 ppb in the cold periods (Greenland stadials, denoted GS) and much lower in the mild interstadials (denoted GI) and as low as 10 ppb at the onset of the current interglacial, about 11.7 ka b2k (far left). In general there is very good agreement between δ18O and [Ca2+], but around 23-26 ka b2k, [Ca2+] reaches about 1000 ppb during two periods of about 1000 years. These are the so-called GS-3 dust peaks. Figure modified from Rasmussen et al., QSR 27, p. 18–28, 2008 (opens in new window).

The potential sources of the dust found in the ice cores are determined from measurements of the Nd and Sr isotopes of the dust. 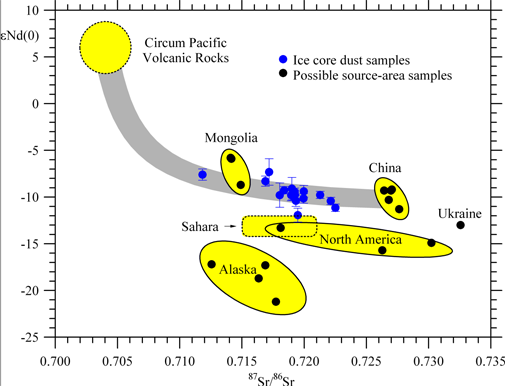 The figure shows a comparison of the isotopic composition of dust from Greenland ice cores with that of deserts and dust source areas in the Northern Hemisphere. The present-day most significant dust source areas are North America, North Africa/Middle East, and Eastern Asia (Mongolia/China). Due to their different geological histories, the dust source areas have different isotopic fingerprints in the elements of Strontium (Sr) and Neodymium (Nd). A fraction of volcanic ash in the ice core samples will drag their isotopic signature in the direction of the 'Circum Pacific Volcanic Rocks'. The ice core dust samples that have been extracted from Greenland ice core ice up to 45.000 years old (blue dots) are seen to have an isotopic composition most similar to a mixing of dust from the Asian source areas. Asia is, therefore, seen as the most important dust source area for Greenland during this period. The conclusion is supported by the mineralogical composition of the ice core dust, which is distinct from that of the African and North American dust.