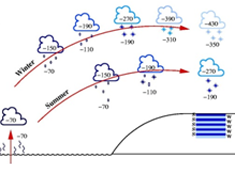 Past Greenland temperatures and moisture sources

The composition of water molecules in ice cores is used to reconstruct past temperatures at time scales from the annual cycle to long term climate variations, such as glacial-interglacial oscillations. The isotopic composition also provides information about changes in precipitation, sea ice, and moisture sources for the Greenland ice sheet and the North Atlantic. 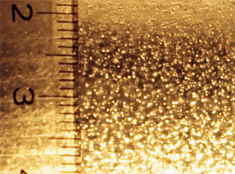 Past atmospheric composition and greenhouse gases

Air bubbles trapped in polar ice sheets reveal the composition of the atmosphere of the past. Ice cores from the large ice sheets show that the atmospheric concentration of greenhouse gases, in particular CO2 and CH4, have risen tremendously over the past 100 years compared to past natural levels. 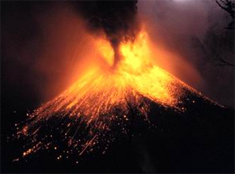 Dust and ionic species in Greenland ice cores contain information about past atmospheric conditions such as the circulation pattern, volcanic activity, sea ice cover, anthropogenic pollution, and the frequency and intensity of forest fires and dust storms. High resolution analysis of ice core impurities enables us to uncover the nature of past climate change year by year. 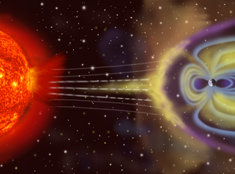 Isotopes created in the atmosphere by cosmic rays, such as 10Be and 36Cl, are trapped in ice cores. The flux of the cosmic rays is mostly controlled by Earth's magnetic field and the solar wind, which is again related to solar activity. Therefore, the abundance of 10Be and 36Cl in the ice reveals past variations in both the Earth's magnetic field and the solar activity.