The geysers are powered by so-called cryovolcanoes that work exactly as "real" volcanoes, just with ice instead of magma. In the cryovolcanoes, the ice deep below the surface is heated by tidal forces and turned into vapor that expands to form a geyser or an explosion. On Enceladus, these geysers eject large amounts of water almost 500 km into space. 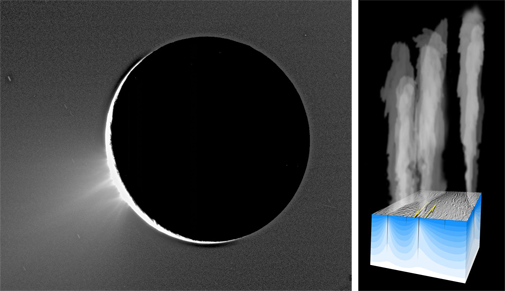 Saturn's icy moon Enceladus has immense cryovolcanism which ejects ice particles 500 km into space. This can be seen on the lower left side of the moon. To the right, a picture describing how the cryovolcanism works. (Picture credit: NASA)

Read about ice on Mars