Why is there no liquid water on Mars at present?

Here on Earth, we have water as liquid in the oceans, in solid form (ice) in the ice caps and glaciers, and as vapor in the atmosphere. On Mars, the story is different.

However, the diagram also illustrates that the typical pressure and temperature on the surface of Mars are relatively close to the point where water is stable as liquid, solid and vapor (called the triple point). This means that if the temperature and pressure increase for a short period of time, for example on a warm summer day, it is possible for ice to melt instead of going directly from ice to vapor.

An example of this can be seen on the picture below. The two pictures show the same crater side with 6 years in between. In those years, a new pattern formed on the side of the crater, probably originating from subsurface ice melting and running down the crater slope.
You can read more about the newly discovered patterns on the Malin Space Science Systems website. 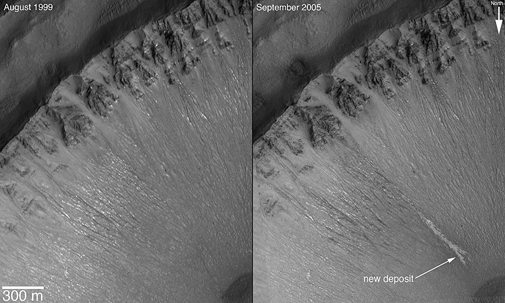 Two pictures of the same crater side, taken in 1999 and 2005. A new feature can be seen, indicating liquid water flowing down the crater side. (Photo credit: NASA/MSSS)

Read about ice on moons