Ice on other planets and moons

Water ice is not restricted to Earth. Observations of interstellar clouds show that the building blocks of water, hydrogen and oxygen, are some of the most abundant elements in the Universe. 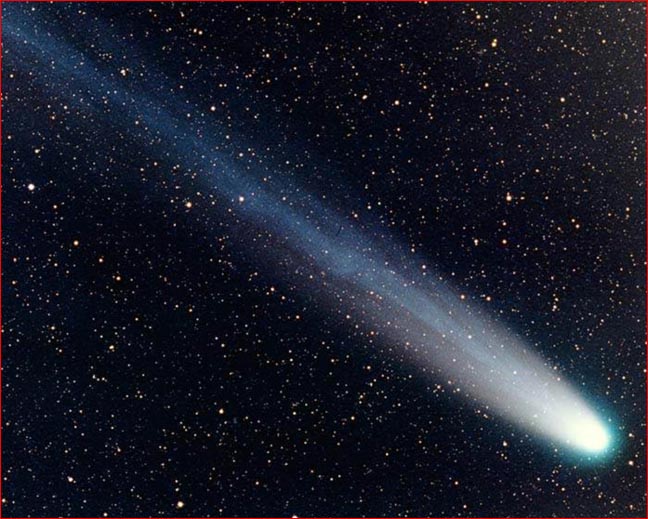 Comet Hyakutake, captured in 1996. Comets consist mainly of water ice and most of the water in Earths oceans was delivered from comets during large bombardments early in Earths history. (Picture credit: NASA)

During the formation of the planets, the temperatures in the inner solar system, close to the Sun, were too high for hydrogen and oxygen to form water molecules. Therefore, the inner planets like Mercury, Venus, Earth and Mars (the so-called terrestrial planets) are all composed of rocky materials with a relatively little amount of water. Most of the water in the oceans on Earth originates from cometary impacts after the creation of our planet. Further out in the solar system, where the temperatures were much lower, the water ice remained stable and the planets (the so-called gas giants) and moons in the outer solar system therefore contain much more water both in their interior and on the surface. Both Jupiter and Saturn have several large icy moons, all with different characteristics. Two of the most exotic and interesting moons are the Jovian moon Europa and the Saturnian moon Enceladus.

Why study the ice on other planets and moons?

The habitability of life as we know it is intimately tied to the presence of liquid water, and this is of course a main cause for investigating the ice in the Solar System. But just as studying the ice here on Earth (by e.g. ice core drilling) can tell us much about the past climate here on our own planet, studying the ice on other planets and moons can tell us much about the past climates and the evolution of those parts of the Solar System. Since the planets and moons in our Solar System all originates from the same cloud of dust and gas, this will also help us understand the evolution of our Solar System and our own planet, as well as the evolution of our own climate. At the Centre for Ice and Climate, our present key points of interest in Mars exploration are:

We are collaborating with the planetary science group at the Niels Bohr Institute as well as with the science teams on the Mars Reconnaissance Orbiter and Phoenix Mars Lander missions:

Mars Reconnaissance Orbiter is the newest satellite orbiting Mars. With different instruments, it will investigate the surface, atmosphere and underground to gain knowledge about the past and present climate of Mars and it will search for future landing sites.
Website: https://mars.nasa.gov/mro/ (Opens in new window)

The Phoenix Mars Lander will land on the northern plains of Mars in May 2008 and dig into the ground to analyze the subsurface ice. It also carries instruments to investigate the polar climate on Mars.
Website: http://phoenix.lpl.arizona.edu/ (Opens in new window)

Read about:
- Ice on Mars
- Ice on moons