A special modelling effort is done for the areas where ice cores have been drilled. For these areas we have detailed knowledge about the snow accumulation rate, the bedrock and surface topography, and the horizontal surface velocity from measurements performed on the ice sheet and on the ice core. This makes it possible to use simple, but specialized, models specifically tuned to these conditions. These models are often one- or two-dimensional simplifications of the three-dimensional flow models. The main goal of model studies at the ice core drill sites is often to establish a timescale for the ice core, i.e. to calculate the relationship between depth and age. In the upper part, the timescale is established by counting annual layers in the ice, but eventually the layers become too thin to be identified and counted, and the timescale further down has to be established from models. 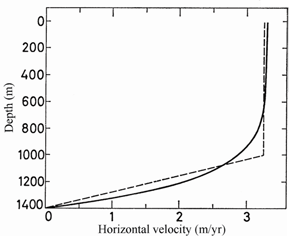 One model that has proven very powerful for dating purposes is the Dansgaard-Johnsen model. This model is named after Willi Dansgaard and Sigfús J. Johnsen who developed this model to date the Camp Century ice core in 1969. Since then this model has been used to create timescales for e.g. the GRIP and NorthGRIP ice cores and to predict the depth of the layer deposited during the Eemian period at NEEM.

The basic assumption behind the model is that the horizontal velocity of the ice can be considered constant from the surface and down to a certain depth, and that it from there on decreases linearly with depth.

Given this model and the values of specific parameters at the drill site (e.g. ice thickness, snow accumulation rate) a timescale can be calculated for the ice core.