Ice is a quasi-viscous material, and it deforms under applied stress. In other words, if stress is applied to ice over long time periods, it behaves like a very tough fluid - it flows with a high viscosity. This is reflected in the shape of the ice sheet; the profile looks like bread dough that has been resting on the table for a while. The deformation of the ice is driven by gravity - the ice deforms as a response to the stress applied by the weight of the overlying ice. Ice deposited on the surface of the ice sheet is transported downwards and towards the ice margin.

The arrows indicate the paths the ice follows as it flows from the centre towards the margin. The ice divide (orange) is the optimal location for drilling deep ice cores. 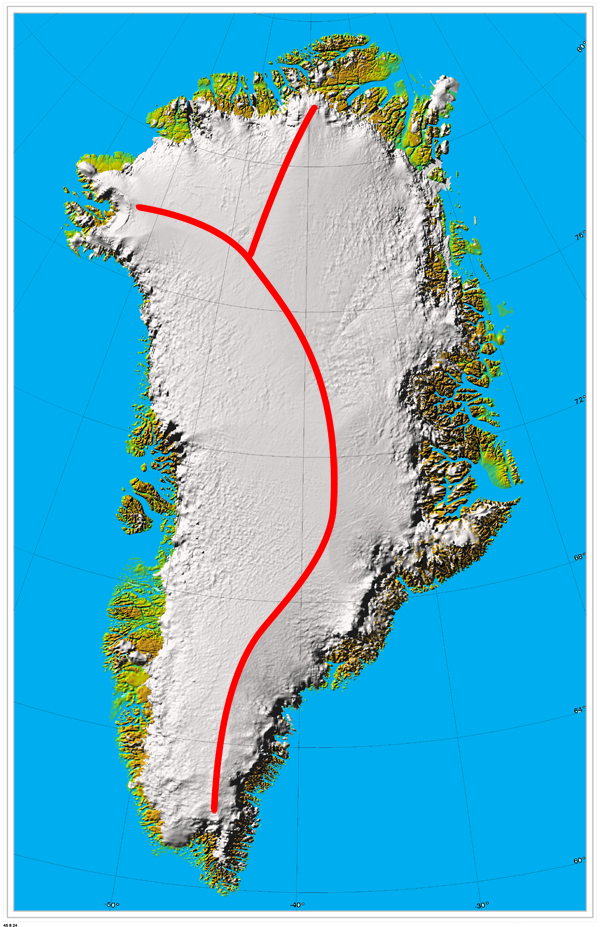 The direction of the main ice divide in Greenland is almost North-South. In the northernmost part of the ice sheet it splits into two. The NEEM drill site is located on the western branch of the ice divide.

As the layers sink down, they get thinner and thinner. However, the amount of snow that falls on the surface each year changes with climate: the snow accumulation is higher in warm periods, because warm air can contain more moisture, and vice versa. Thus the initial thickness of the annual layers changes with time. Therefore, the thickness of annual layers found in the ice cap is determined by the surface accumulation history and the flow history combined.

Many different models of different complexity have been developed, and the choice of model for a study depends on the goal of the study. Large-scale ice sheet models are used to investigate the size and shape of the ice sheet under different climatic conditions and to predict its reaction to global warming, while simplified models tuned to the conditions at the drill sites are used to date the deep part of the ice cores.

Annual layer thicknesses at NorthGRIP. At the depth of 1500 m the transition between glacial and interglacial climate is found. Much less snow fell on the ice cap each year during the glacial period compared to today. Therefore, we see a sharp change in the curve at this depth.