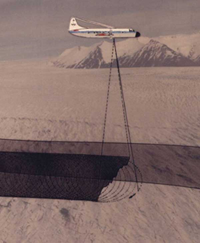 Radar measurements conducted from an airplane. A radar signal is transmitted and the echo from the ice is recorded. Radar data give information on the thickness of the ice, the bedrock topography and the internal layering in the ice sheet. Credit: NASA.

The Greenland ice sheet has been thoroughly investigated using mostly airborne but also ground based radar systems. For the airborne experiments, the radar is installed inside an aircraft that flies over the ice at an altitude of a few hundred metres while the radar transmits a signal and records the echo returned from the ice. The strength of the echo depends on the electrical properties of the ice at different depths. These are determined by the density of the ice (which varies only in the top 100 m or so) and by the impurity content of the ice, which changes with climate. Volcanic eruptions also change the impurity level in the ice because a layer of increased acidity is deposited on the ice after a large volcanic eruption and can therefore sometimes be seen in the radar profiles.

The radar images collected over the Greenland ice sheet reveal internal layers in the ice. These layers can be followed over hundreds of kilometres and represent layers of constant age because any given layer was deposited at the surface at the same time over the entire ice cap. Since deposition, the layer has moved with the surrounding ice and its present shape is a consequence of several factors such as

The effect of the accumulation rate pattern is that the layers sink down faster in areas with a high snow accumulation rate compared to areas with less snow fall. The effect of this on the layer shape is largest in the top of the ice sheet. In the lower part of the ice sheet the shape of the layers follow that of the bedrock topography. However, if the ice is at the melting point at the bedrock this causes the layers to have a different shape than predicted by the bedrock topography, because the basal melting “pulls down” the layers from below. Thus the shape of the internal layers combined with ice flow models can be used to obtain information on the accumulation rate pattern and the basal melt rate pattern. Furthermore, if the ages of the layers have been determined from the dating of an ice core, information on the depth-age relationship at other locations is readily available by tracing the layers in the images. 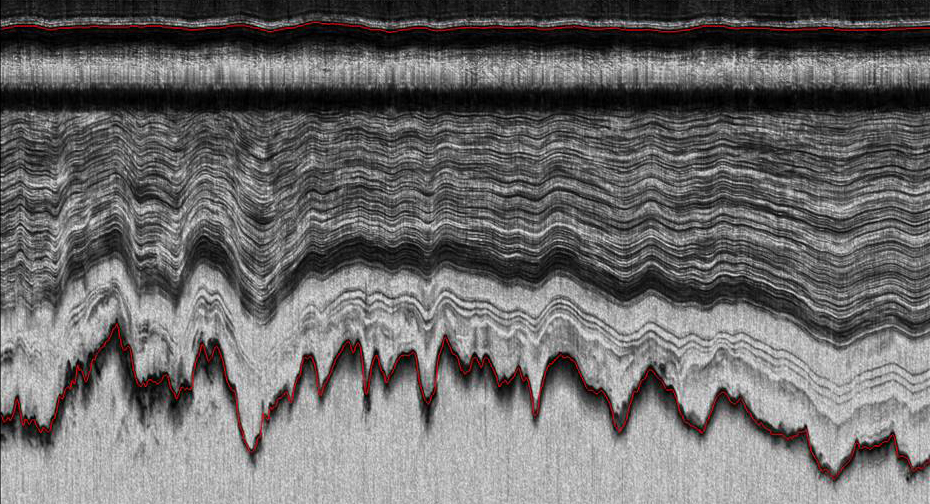 Radar image of the Greenland ice sheet. The ice surface and the ice-bedrock interface are shown in red. This section from North-East Greenland is 160 km long and collected in an area where the ice is frozen to the bedrock and the shape of the internal layers follow the bedrock topography. Credit: CReSIS 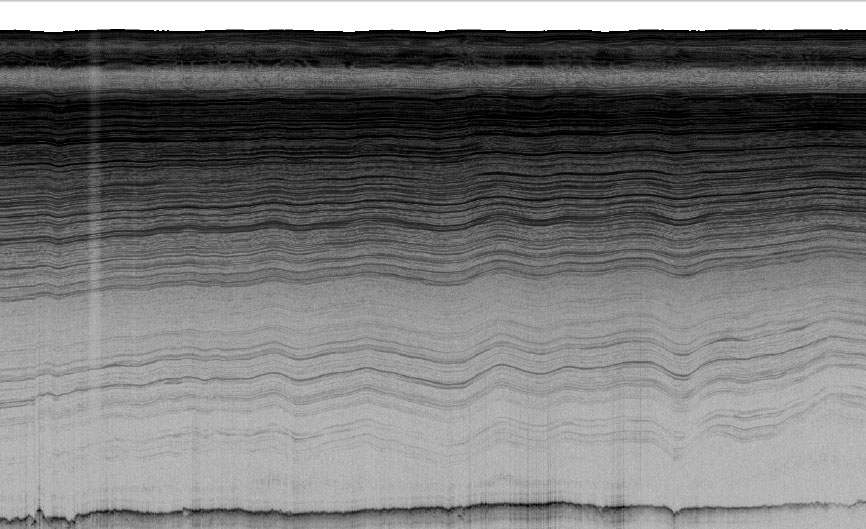 This 150 km long section of radar data collected around NorthGRIP shows a flat bedrock (the thick dark line close to the bottom of the picture is the bedrock echo) but undulating internal layers. The shape of these layers is created by changing basal melt rates along the sections. Where the layers dip down the basal melt rate is highest. Credit: CReSIS