The hexagonal ring structure of an ice crystal (the blue and black spheres represent the oxygen atoms from the H2O). 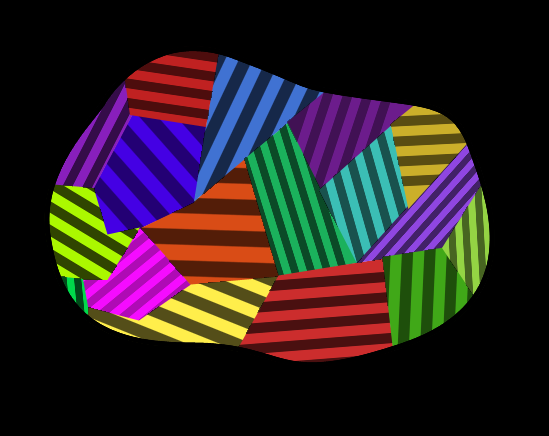 Glacier ice is built up from many individual ice crystals that are packed closely together. In the top of an ice sheet the ice crystals are randomly oriented because the snow flakes have settled randomly. Some crystals are oriented favorably for basal gliding and others are not. This means that the deformation proceeds much more slowly than for a single ice crystal. 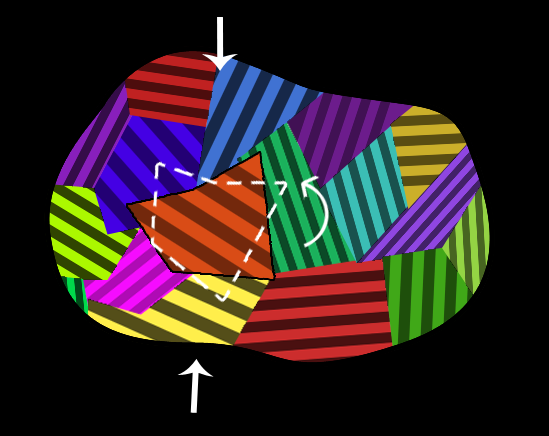 As the ice deforms, the individual crystals in the ice slowly change shape as the basal planes glide past each other, just like a deck of cards changes shape when it is pushed from one side. This causes the individual crystals to rotate. Generally, the c-axes of the crystals rotate towards an axis of compression and away from an axis of extension. The effect of this is that deep down in the ice sheet the crystals are no longer randomly oriented but have a preferred direction, which depends on the flow history. Thus the flow history of the ice can be found from investigation of the crystal orientation at different depths.

The crystal orientation is determined by studying thin sections of the ice. A thin section is a slab of ice approx. 0.5 mm thick. When this slab of ice is placed between two crossed polarization filters, the individual ice crystals can be seen. The colour of the crystal depends on its orientation.

Read more about how crystal size distribution and orientation are determined from analysis of thin sections.