During the period from 1963 to 1966 Lyle Hansen and his co-workers from the U.S. Army Cold Region Research and Engineering Laboratories retrieved a ~1390 m long ice core at the American subsurface military facility named Camp Century, some 220 km east of Thule air base. This was the first time that an ice core had been drilled all the way to bedrock. Stable isotope measurements were carried out on the Camp Century ice core in Copenhagen and these were the first to reveal the high degree of climatic instability seen during the glacial period. Read more about these early scientific discoveries. 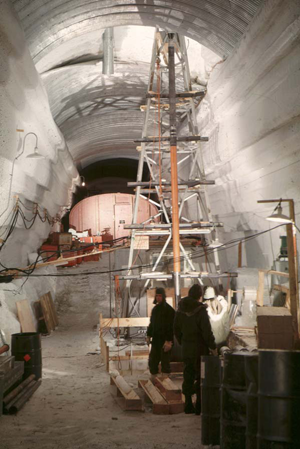 The ice core drill that penetrated the ice to bedrock at Camp Century in 1966 (Photo: USArmy CRELL).

A few years later the drill that had been used to retrieve the Camp Century core was lost during the Byrd deep drilling on the West Antarctic ice sheet. As the Camp Century drill was unique in its deep drilling capabilities, Greenland drilling operations in most of the 1970s were limited to more shallow depths. A thermal drill (that melted its way down through the ice) designed by Lyle Hansen was used to recover three ~400 m long ice cores from the Greenland ice sheet: from the DYE-3 radar station (1971), Milcent (1973) and Crête (1974). These drillings were all part of the Greenland Ice Sheet Program (GISP) that also included the drilling of numerous 50 - 100 m deep shallow ice cores, at locations such as DYE-2, Summit, North Site, the Hans Tausen ice cap, Camp Century, and Camp III.

In 1979 a Danish deep drill called ISTUK had been developed and this drill was used to retrieve a ~2040 m deep ice core all the way to bedrock at DYE-3 from 1979 to 1981. The DYE-3 deep drilling effort was the last drilling under the American-Swiss-Danish GISP program. Stable isotope measurements on the DYE-3 ice core confirmed the climatic instability during the last glacial period that was first discovered from the measurements on the Camp Century core.

During the 1980s several shallow and one deep ice core were drilled on the small Renland ice cap in eastern Greenland. Furthermore, shallow ice cores were drilled in the DYE-3 area to improve the interpretation of the DYE-3 deep core. In 1984 and 1985, a number of shallow cores were retrieved in the vicinity of Crête in search of a new deep drilling site near the summit of the Greenland ice sheet.