The Hans Tausen drill (HT drill) is an electro-mechanical drill used to extract 1.5 - 4.0 m long 98 mm diameter cores from 2 m below the surface down to bedrock. It comes in 3 variants or has 3 drilling modes:

This mode is used from 2 m below the surface to approximately 150 m for extracting firn cores and the first 50 - 70 m of ice core. Similar to the shallow drill, it has an electric motor controlled from the surface to rotate a core barrel and drill head. The drill head cuts away the ice sending the chippings up between the inner and outer core barrels using the thick spirals. Unlike the shallow drill it has a special spiral pump, called a booster, to help pack the ice chippings into a separate chip chamber above the inner core barrel. 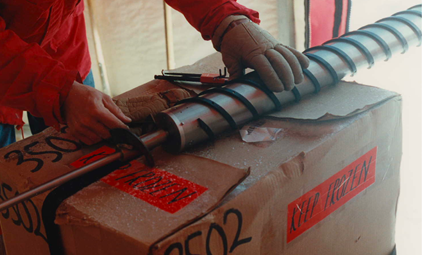 In wet drilling mode the HT drill extracts ice core from 150 m down to approximately 450 m depth. This is still considered a "shallow" drilling operation. Below approximately 150 m, the sudden release of stresses in the ice causes the ice core to crack, and the internal fractures reduce the ice core quality significantly. By adding a drill liquid to the borehole, the stresses are reduced and core quality remains high. The dry mode core barrel of the HT drill is replaced with a core barrel with thinner spirals to "stir" the chippings and liquid. The booster now actively pumps the liquid and chippings from the drill head into the chip chamber where a filter is used to separate liquid from chippings. The liquid then circulates down the outside of the outer core barrel back to the drill head.
A further addition to improve drilling is to replace the booster with a piston pump. This increases the liquid circulation and the packing of the chippings in the chip chamber. In this mode only ten or so metres of liquid are used in the borehole.

When drilling below ~400 m depth, the bore hole must be filled with a drilling liquid to make sure that the pressure in the hole is approximately the same as in the surrounding ice. Otherwise the ice would deform due to the pressure difference, and the hole walls would move inwards and close the hole. Finding a good drilling liquid is difficult. The liquid must satisfy many conditions:

Different combinations of liquids have been used for different projects. At the most recent drilling project, the NEEM project, ESTISOL 240 and COASOL is used as drilling liquid.

For extracting ice cores at large depths, two changes are made to the drill system. The motor section is replaced with a hardened pressure resistant tube containing the drill motor and electronic sensors. These sensors measure several parameters during the drilling operation to help the operator on the surface understand what is happening to the drill operating as much as 3 km below surface under up to 300 atmospheres of pressure.
The second major change is the replacement of the drill's core barrel and chip chamber with larger versions. Due to the larger and larger depths reached by the drill for each ice core run, more and more time is spent moving the drill up and down the borehole. To increase the production speed, the drill is modified so it can drill up to 4 meters at a time. 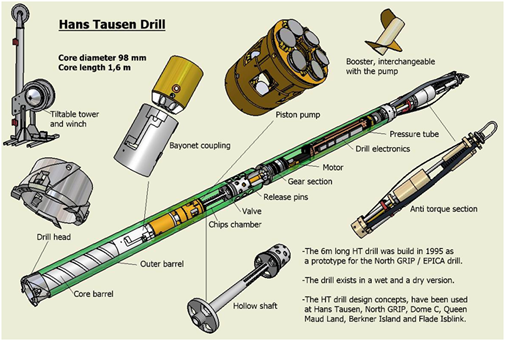 The major components of the Hans Tausen drill. The first version, a prototype for the deep NGRIP and EPICA drills was tested on Hans Tausen Ice Cap in 1995.