An Isotope Ratio Mass Spectrometer (IRMS) separates atoms with different mass. At Centre for Ice and Climate, mass spectrometers are used for analysis of the isotopic composition of the ice and of the gas in the bubbles of the glacier ice.

The isotope ratio mass spectrometer uses the fact that heavier isotopes are harder to deflect than light isotopes. The IRMS includes three fundamental parts, (1) a "source" of positively charged ions or molecular ions, (2) a magnet, and (3) ion collectors/detectors. 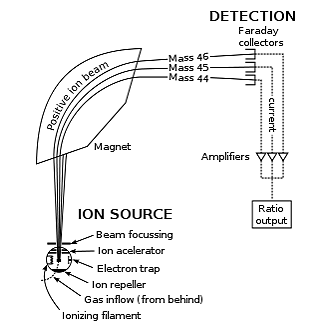 Schematic depicting of a triple-collector IRMS system to analyze the isotopic composition of CO2. The same principle is used for analysis of the isotopes of 16O, just with a different set-up of the collectors.