Ice cores from Greenland and Antarctica contain very small amounts of impurities because they are formed at locations very far from most sources of impurities and pollution.

Typically, the concentration levels of impurities are very low, often in the order of magnitude of parts per billion of the melted ice (ppb, 1:109). Therefore the detection methods have to be very sensitive. They must be able to detect concentrations similar to a pinch of salt in a 50 m swimming pool filled of pure water.

As a consequence, the surface of any single ice sample has to be decontaminated carefully under clean room conditions before melting and measuring. A smarter way to obtain uncontaminated ice samples for analysis of impurity contents is to melt the ice in a way so only the clean inner part is used for the analysis.

The air is removed in a so-called debubbler, before the sample stream is split and passed into a number of analysis systems, in which the following records are obtained:

The impurities come from different sources and thus yield different information about the climate system. Some of the impurities have an annual cycle, and these records can therefore be used for identification of the annual layers in the ice. One example is Ca2+, which comes mainly from dust and has highest concentration in spring. 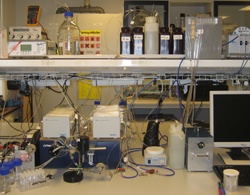 The CFA system looks complex although it consists of numerous relatively simple detection devices. To keep the overview, a sophisticated soft- and hardware is needed to control the system, to acquire data, and finally to process data. With such a system, 6-8 people are able to measure the impurity content in up to 30 meters of ice during 24 hours. The resolution is sufficient to allow detection of annual layers as thin as just a few centimetres.