Sampling and analysing the gas

As a first step, ice samples are cut and the outer surface of the core is removed for decontamination. Afterwards, the ice is placed in a sampling vessel which is then sealed and evacuated. Subsequently, the air trapped in the bubbles is released into the now evacuated volume by either a wet or dry extraction method. In a stream of Helium (carrier gas), the released air is transported from the extraction unit to the analytical devices for final analysis. On the way, the individual samples are separated. Concentration measurements can be performed using a gas chromatograph (GC), where isotope ratios are determined using mass spectrometry (i.e. isotope ratio mass spectrometer (IRMS)). New laser based spectroscopy techniques show promising results and might become more and more important in the near future. 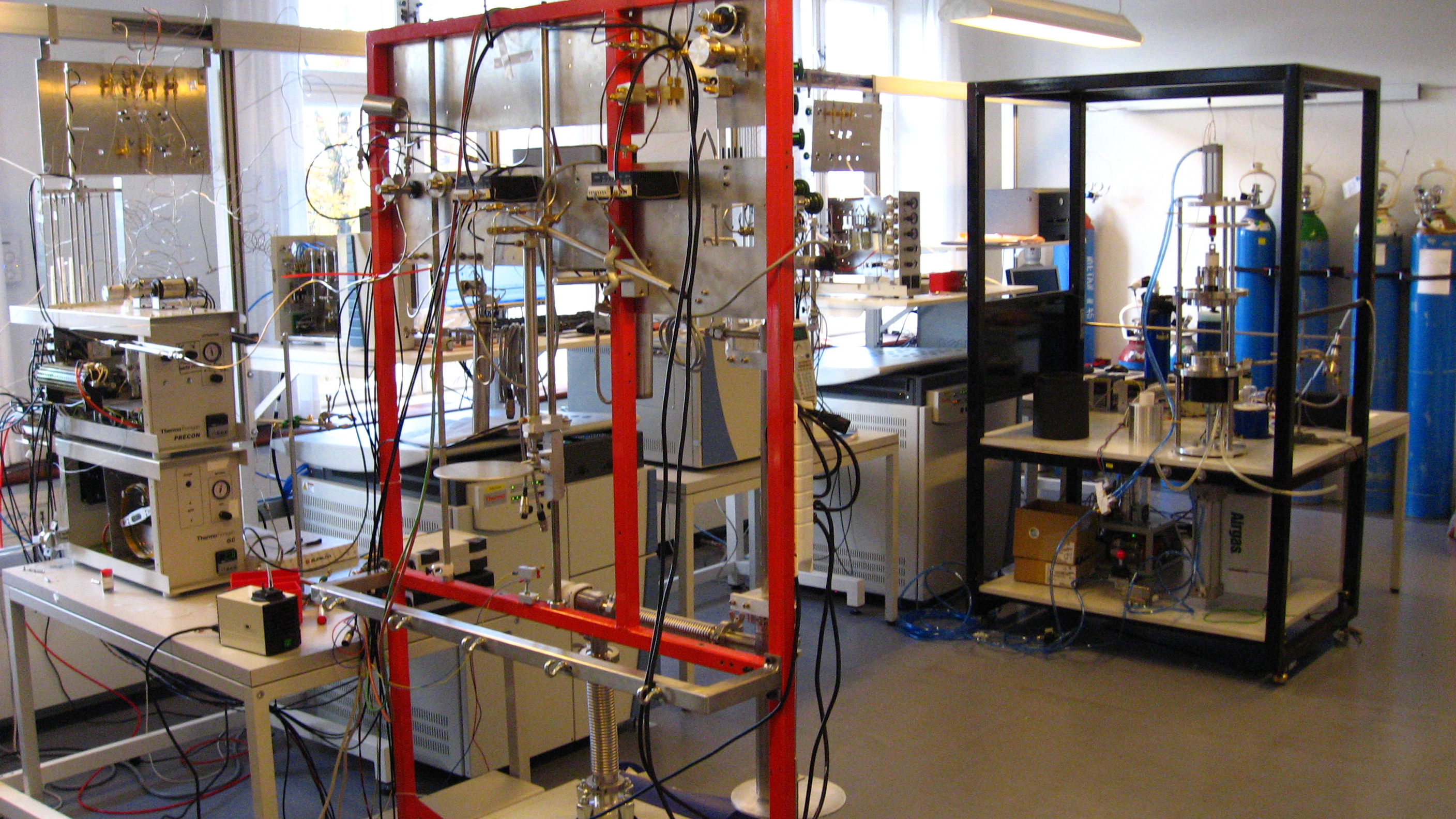 The gas analysis laboratory at Centre for Ice and Climate. The two IRMS are connected to the extraction and separation lines of CH4 and N2O (left) and CO2 (right set-up).

Different techniques exist to release the air from the ice. Depending on the gas to be measured, either a wet or dry extraction technique is applied. This is due to possible contamination from in-situ production (i.e. the formation of the analyzed gas in the measurement set-up). As an example, CO2 is produced in the liquid water phase by chemical reactions of e.g. dissolved organic material contained as impurities in the ice. It is therefore necessary to extract the CO2 from the sample without exposing liquid water. For CO2 measurements, the bubbles are therefore extracted using a dry extraction technique, where the sample vessel is cooled and the ice cube is crushed into small pieces to release the bubbles. For other gases like CH4 or N2O the ice sample can be melted (and refrozen) to release the air. This technique is called wet extraction. 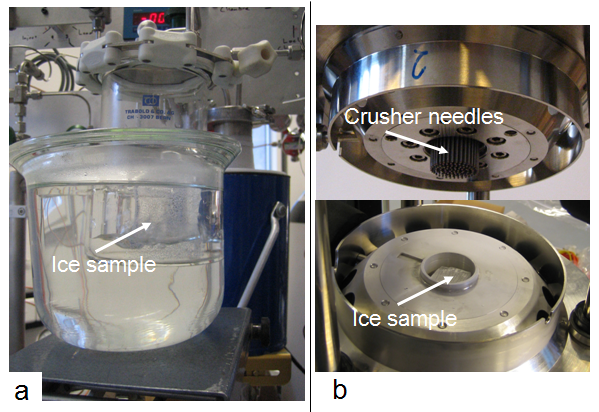 Separation and detection of gases and isotopes

The gases are separated using gas chromatography (GC), taking advantage of the differences in their physical and chemical properties. Using Helium as carrier gas, the air is flushed continuously through different traps and capillary columns. These traps and columns are either kept at well defined low temperatures (freezing out of a specific gas), filled with materials interacting in a specific way with each of the gases (i.e. the higher the interaction the slower the gas is transported through the column) or a combination of both. Gas chromatography allows for a complete separation resulting in high yields.

One way to detect the separated gases is to measure changes in the thermal conductivity of the carrier gas stream (Helium) which changes depending on the amount and properties of the other gases mixed with the carrier gas. The measurements can then be used to calculate the concentrations if the system is properly calibrated. Other methods exist (e.g. laser absorption spectroscopy).

On-line coupling of the GC with Isotope Ratio Mass Spectrometry (IRMS) allows subsequent determination of the isotopic composition. The advantage of such an overall set-up is that all steps including separation and detection can be performed on-line in a continuous flow of carrier gas. This helps to keep timing and conditions of events as constant as possible from one sample to the next.