After recovery, the freshly drilled ice core is brought into the logging and science trench. Here the top of the newest core piece is fitted to the bottom of the previous core piece. By checking that the two pieces fit precisely together, the possibility of loss of ice core can be ruled out. The length of the core is then measured. It is the sum of all these measured core lengths that gives the total length of the ice core. The core length is different from the measured drill cable length because the cable is stretched by the weight of cable and drill.

The core is then marked in sections called "bags". Each bag is 0.55 m and three bags, i.e. 1.65 m, constitute a "run". The core is first cut in runs. Each run is cut parallel to the core axis into five segments. All cuts are performed on high quality band saws. The first cut is horizontal and separates piece 1 from the rest of the core. On core piece 1, the physical properties of the ice, e.g. the crystal structure, are measured. 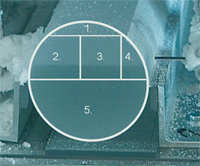 Cutting plan for the NorthGRIP ice core. The following are measured on the indicated core pieces: The physical properties of the ice (1), the gas content of the ice (2), impurities (3), stable isotopes (4), and electrical conductivity (5). After measurement piece 5 is stored in the freezer in Copenhagen.

The second cut is also horizontal and separates pieces 2, 3, and 4 from the main core, 5. The ice slab, which later will be cut into pieces 2, 3 and 4, is carefully cleaned with a microtome knife and transported to the line scanner that records the visual layers in the core.

After the line scan, the ice slab is cut into the three pieces 2, 3, and 4. Piece 2 is packed for measurements to be done back home in the gas laboratory. Core piece 3 is carried to the Continuous Flow Analysis (CFA) lab and melted for chemical analysis of the impurities in the ice. Piece 4 is used to study the content of stable isotopes, which reveals past surface temperatures at the drill site. This piece is cut into samples (typically 5 cm long, corresponding to more than 60,000 samples from the full ice core) that are packed and transported back to the lab where the measurements are carried out on a mass spectrometer. 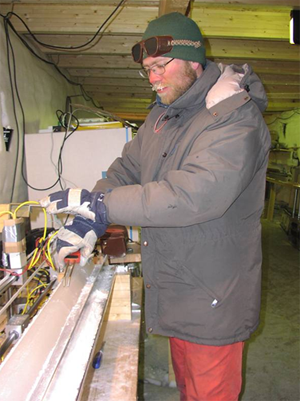 ECM measurements being carried out.

The plane surface of the main core, piece 5, is cleaned with a microtome knife and the electric conductivity of the ice is measured by moving two electrodes with an electrical potential difference of about 1000 V along the ice surface. The resulting current is a measure of the acidity of the ice. A significant feature of this co-called ECM record is that it contains large peaks caused by past volcanic eruptions. During the eruption large amounts of SO2 are released to the atmosphere, where it is eventually turned into sulphuric acid, which shows up in the ECM record. After the ECM-measurements, the main core is cut into segments of 55 cm (bags), packed in insulated boxes and sent to Copenhagen, where they are stored in big freezers at -25°C.

Read more about the different analysis methods by following the links in the text or use the list below: