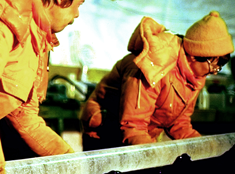 Ice core drilling in Greenland was initiated in 1955 and since then numerous short ice cores and several deep ice cores have been retrieved from the Greenland ice sheet. The newest deep drilling project NEEM commenced in 2007 and has the goal of retrieving an undisturbed record of the full Eemian interglacial period 115,000 - 130,000 year ago. 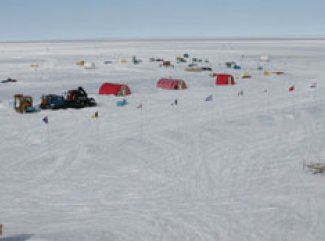 Drilling ice cores in the middle of the Greenland ice sheet is a demanding task. Researchers and logistics personnel live for weeks or months at a time in a camp constructed purely for the purpose of retrieving ice cores. People live above ground in tents or in a wooden dome building, while the drilling and handling of the ice cores take place under the surface. 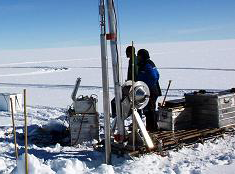 The key to a successful ice core drilling is the highly specialized ice core drill. The ice core drills that are used for the drilling projects today have been developed over decades and build on the knowledge, experience and hard work of many people. Different drills are needed for different drilling depths because the conditions change with depth through the ice cap. 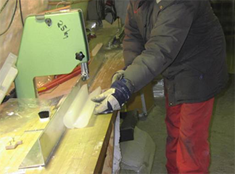 A significant part of the processing and analysing of the ice cores takes place in the field. Here an international team of students and researchers from many countries share the task of cutting and analysing the newly drilled ice cores. In a -25°C underground trench some measurements are performed right away while others require equipment that cannot be moved into the field. 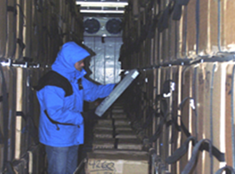 Some measurements are performed in the field, but most of the ice core is packed in boxes and transported back to Copenhagen. Here, large freezers hold the ice core archive, which contains a total of 15 km of ice from several Greenland deep drillings and many other drilling projects. The archive makes it possible to study the old cores when new measurement techniques are developed or new ideas emerge.