The isotopic composition of the water molecules in the ice cores does not only tell us about the local temperature back in time at the drill site. It also tells us about the conditions where the water initially evaporated. When water evaporates from an ocean or land surface, it is typically transported aloft in the atmosphere after which it follows the winds. Eventually it condenses and precipitates out as rain or snow a completely different place from where it evaporated. Because the history of the precipitation influences the isotopic composition, the isotopes can reveal past changes both at the source areas far from the drill site and in atmospheric circulation patterns.

Moisture evaporated from pre-specified regions of the world (land areas and oceans) are treated as tracers in the atmospheric GCM. Here they undergo transports and phase changes identical to those of the total moisture amount in the model. When the moisture forms precipitation, we thus know the source distribution of the precipitation. This can then be compared to ice core data.

Analyses indicate that, although the NGRIP core was drilled only about 320 km from the GRIP core, there are significant differences in the sources of precipitation for the two sites both now and during the glacial. To contribute to an understanding of such differences, the Centre for Ice and Climate conducts a series of computer simulations of the transport of water vapor from the evaporation areas to the Greenland Ice Sheet. We use a general circulation model (GCM) where we have divided the surface of the Earth into a number of source areas such as North America, Greenland, the Pacific and Atlantic Oceans etc. The water evaporated from each of these areas is tracked in the model until it forms precipitation. For any given spot we can thus determine which percentages of the precipitation that originate from each of the source areas.

The surface elevation as it is used in the computer simulations for present day (left panel) and the last glacial maximum (right panel). Note in particular the elevation differences over North America and Northern Europe showing the large ice caps that covered these areas during the last ice age (Data from Peltier, 2004, Ann. Rev. Earth Planet. Sci.).

The results from these computer experiments are still under way, but we have, for instance, seen how the much lower temperatures and the massive ice sheet that covered the whole northern part of North America (the Laurentide Ice Sheet) conspired to change the atmospheric circulation during the Last Glacial Maximum (LGM). The results show that Greenland encountered a shift towards greater Pacific influence than today. This shift is larger toward the northwest and will therefore be more pronounced at NGRIP than at GRIP, partially explaining the observed difference between ice core records of NGRIP and GRIP.

The colder surface temperatures and the large ice caps during the last ice age had a major influence on atmospheric circulation patterns. Here we show the so-called 500 hPa height field which approximately corresponds to the mean wind direction at 5 km’s height. Present day is shown in the left panel and LGM conditions to the right. The dots mark the locations of the Greenland deep ice cores. The arrows indicate how Greenland during LGM to a larger extent is influenced by winds that have passed from the Pacific and North of North America. 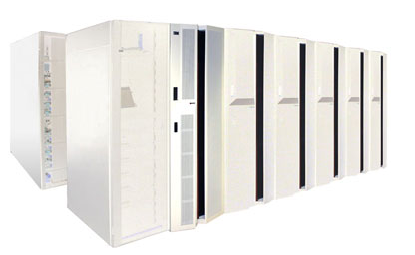 This is not a refrigerator but an IBM supercomputer at the Arctic Region Supercomputing Center at the University of Alaska Fairbanks, with whom we cooperate. These machines deliver the necessary computing power to perform GCM climate simulation experiments.