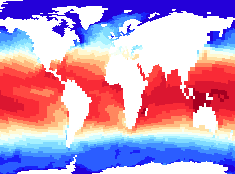 Modelling CO2 in the ocean

The ocean is the climate system's largest reservoir of carbon, and how the ocean interacts with the atmosphere is therefore important for atmospheric carbon dioxide levels.

At the centre, we will use an ocean model for studying the impact of changes in climatic conditions on the air-sea exchange of CO2. For example, the role of changing ocean circulation, sea ice extent, and temperature on the oceanic CO2 uptake will be investigated. These studies can be related to the observed record of CO2 and other climate indicators (i.e. δ18O) in the ice cores. In particular, the evolution of CO2 and other greenhouse gases will be studied during specific periods where rapid shifts are seen in the ice core record. Other atmospheric gases than CO2 are influenced by the biological, geological, and chemical processes in the ocean, and particular studies will be focused on understanding the relation between nitrous oxide (N2O) – another important greenhouse gas – and CO2.

The atmospheric concentration of CO2 is primarily controlled by inputs from the land and ocean surfaces.

The ocean is the largest reservoir of carbon (about 38,000 billion tonnes) and therefore significantly influences the atmospheric CO2 level during both glacial and interglacial periods. On long time scales (1000 – 10,000 years) the atmospheric concentration (which currently sums up to 'only' about 750 billion tonnes of carbon) is mainly regulated by the ocean.

Ice core records from Antarctica show fluctuations of atmospheric CO2 level which occur in periods of 10 – 1000 years, and during these relatively short periods, changes in the carbon cycle both on land and in the ocean have the potential to influence the atmospheric CO2 level.

To analyse the Holocene ice core records an ocean general circulation model (named MPI-OM1) will be applied to different periods in the Holocene. The model calculates the physical conditions in the ocean including the distributions of ocean currents, sea level, temperature, and salinity. The ocean conditions are described on a global grid with especially fine resolution in the North Atlantic. This region is particularly dynamic and plays an important role in the formation of the dense deep water which fills the bottom of the world ocean. The temperature distribution in the Western Atlantic is shown in the figure below. The insert (lower right) shows the location of the transect along which, the modelled temperature is shown. 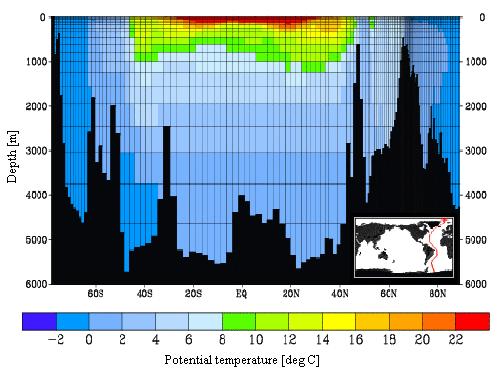 A north-south section of the temperature in the western Atlantic, showing the distribution from the Arctic Ocean to Antarctica (see insert). The ocean bottom along the section is shown in black.

Sea ice extent and thicknesses are also calculated in the model. It is important that the model captures this correctly, as sea ice influences the exchange of CO2 betwen the ocean and the atmosphere. The ocean model takes the biological, geological, and chemical processes into account (a so-called biogeochemical model component). In this way, the marine carbon cycle is simulated along with the cycling of other nutrients. Thereby the model can describe the major processes that regulate air-sea exchange of CO2 and also exchanges of other greenhouse gases.

The annual cycle of sea surface temperatures from a model run. The day numbers are displayed as the value of T in the upper left corner.

The annual cycle of sea ice thickness from a model run.