Climate during the Holocene

The major part of the Greenland ice sheet consists of Holocene ice. The Holocene only spans 11,700 years out of the 123,000 years covered by the NGRIP ice core, but almost half of the NGRIP core consists of Holocene ice. There are two reasons for the large amount of Holocene ice. Firstly, the amount of snowfall in the coldest parts of the glacial was as low as 30% of the Holocene values, making the glacial annual layers correspondingly thinner than the Holocene annual layers. Secondly, the ice in the Greenland ice sheet flows downwards and towards the margins of the ice sheet. The ice flow is thinning the ice layers as times go by, making the older ice from the Glacial and Eemian periods much thinner than the younger Holocene ice.

As seen in the figure, the Holocene in general is a period of remarkably stable δ18O values. It can also be seen that there is a general tendency towards less stable δ18O values in the northern ice cores. This South-to-North increase in variability agrees with temperature observations along the Greenland West coast. 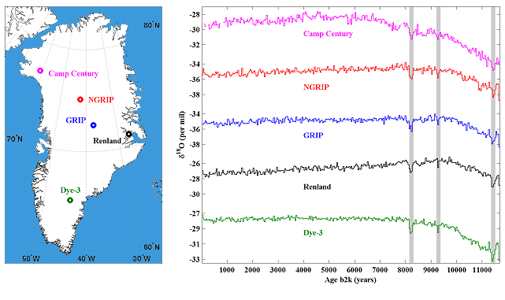 Map showing drill site locations for five ice cores that all penetrated the entire Holocene and the corresponding Holocene δ18O records (reflecting temperature) for the five ice cores. b2k means before A.D. 2000. Three cold events that are detectable in all five ice cores are shaded gray.

The figure also shows that the only significant climatic events that can be seen in all the five Greenland ice core δ18O records are the common dips in δ18O some 8200, 9300 and 11400 years ago. These events are known as the 8.2ka and 9.3ka cold events and the Preboreal Oscillation, and they are observed in ocean sediment cores, tree ring data, and stalagmite records all over the northern hemisphere. The events are believed to be associated with very large fresh water outbursts from the decaying Laurentide ice sheet that covered North America during the Glacial and was melting away during the early Holocene. The large amount of fresh water probably temporarily weakened the North Atlantic Ocean overturning circulation thereby decreasing the oceanic heat transport towards the polar region.

The millennial scale δ18O trends in the five Holocene ice core records shown in the figure are quite different. The Camp Century and DYE-3 have very low δ18O values some 11,000 years ago compared to what is seen in the other cores. The differences are probably due to higher elevations at DYE-3 and Camp Century at the time. Since atmospheric temperatures decrease with height, the higher elevations result in colder temperatures and therefore lower δ18O values at these sites. These changes in elevation occurred because the Greenland ice sheet covered a large area right after the cold Glacial period but has retreated during the Holocene. Ice core sites like DYE-3 and Camp Century, which today are near the margin of the ice cap, would therefore have been much further away from the margin and located at a much higher altitude in the early Holocene.