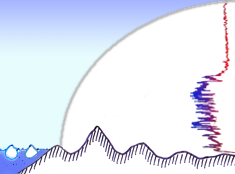 Ice core records from Greenland give reliable information on Greenland climatic conditions year by year some 123,000 years back in time. During this time period Greenland has experienced two major shifts in climatic conditions: The beginning and end of the last glacial period.
The Glacial began about 120,000 years ago when climate slowly changed from the warmth during the Eemian interglacial period into colder glacial conditions. The end of the Glacial was much more dramatic. About 11,700 years ago, Greenland temperatures increased by up to 15-20°C during a period of a few decades! This is seen as a ~6‰ shift in δ18O in most Greenland ice core records. This abrupt change in climate marked the end of the Glacial and the beginning of our current interglacial, the Holocene. The Holocene is the warm period of our time. 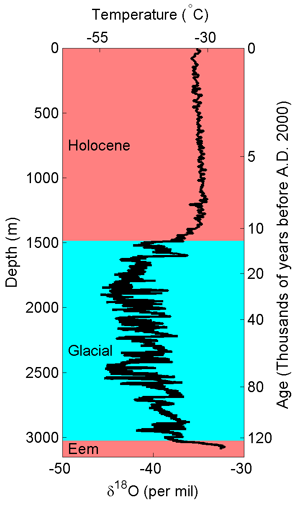 The NGRIP δ18O record from surface to bedrock at 3085 m depth. The δ18O values reflect the amount of the heavy 18O-isotope in the ice and is a measure of the temperature. The NGRIP record spans a total of ~123,000 years. The approximate age of the ice is shown on the right axis.

The Eemian, the Glacial and the Holocene are the three main climatic periods covered by the Greenland ice cores. These periods are marked on the figure where the NGRIP δ18O record is plotted as a function of core depth.

Click on the different climate periods (Holocene / Glacial / Eem) to learn more about these climatic periods.