The atmosphere on Mars is much thinner than our atmosphere and has an entirely different composition. While Earth's atmosphere contain about 0.4% CO2 and about 1% water, CO2 is the main part of the Martian atmosphere that only contains 0.05% water. 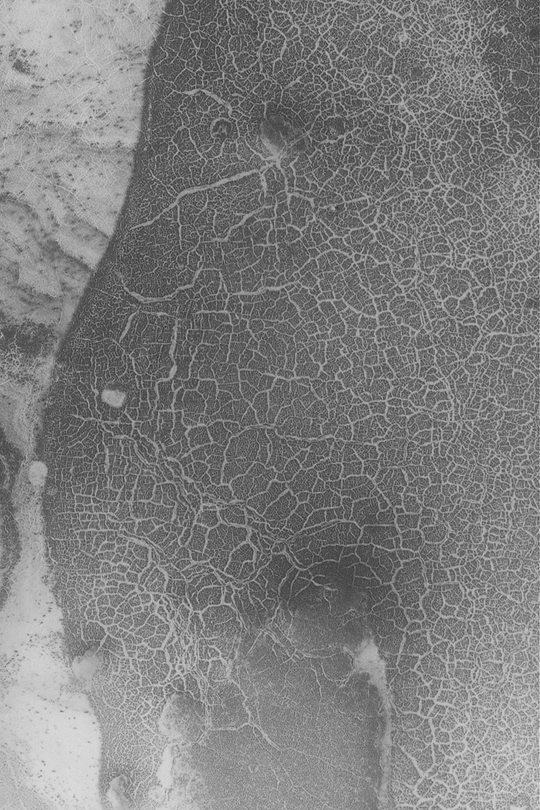 Polygonal patterns on Mars are an indirect evidence of subsurface ice. They are created when the water vapor is transported through the dust layer. Same features can be seen in Antarctica. (Picture credit: NASA/MSSS)

In contrast to the ice covered areas at high latitudes, the glaciers on the low latitudes do not originate from the current climate period, since the temperatures currently are too high for glaciers to form. They are remnants from older periods with different climate conditions caused by shifts in the rotation axis of the planet. The ice is now stored underneath a layer of dust and rocks that protects it from melting despite high temperatures on the surface.
The Martian ground ice is deposited inside the porous soil (called the regolith) in various depths mainly depending on the latitude. In some areas at high latitude, around 50% of the mass in the underground is ice and the ground ice lies very close to the surface. The origin of the ground ice is still being discussed in the scientific community. Many theories consider the origin of the ice as a combination of frozen ancient oceans, upwelling from subsurface water reservoirs, and the ice being deposited under current climate conditions, where water is exchanged with the other water reservoirs through the atmosphere.

The two PLD are located in the polar regions of Mars and are currently the largest known water reservoirs on the planet. The north PLD has a diameter of around 1000 km and the south PLD is around 1500 km, comparable to the size of the Greenland ice sheet on Earth.
Both the north and the south PLD consist of layers of water ice, dust and CO2 ice, deposited through millions of years.

The winters on Mars are so cold that the CO2 in the atmosphere freezes out (freezing point -126°C), so both the north and the south PLD are covered by a thick layer of seasonal CO2-snow in the winter season. Both the north and the south PLD have a distinctive upper layer, which can be seen as the white patches on the pictures. In the north, this layer consists of water ice, which covers the underlying deposits. In the south, it consists of a layer of CO2 ice with a thickness of a couple of meters that only covers a small part of the underlying water ice, which is covered by a layer of dust. This makes the south PLD look much smaller than it really is.

Both the north and the south PLD have a very distinctive spiraling pattern that is counterclockwise in the north and clockwise in the south. The origin of the pattern is not fully understood but research has suggested that it could be formed by a combination of patterns of winds and incoming solar radiation.