The Greenland ice sheet is a dynamic body of flowing and deforming ice. Snow is deposited on the central parts of the ice sheet and is gradually compressed to ice that slowly flows towards the ice margin.

At the margin, the ice is removed by melting or by discharge of icebergs into the ocean. When the amount of snow fall or the temperature changes, the Greenland ice sheet reacts and changes both its extent and thickness.

Schematic of the flow of ice in the Greenland ice sheet. The arrows indicate flow direction. As the layers move down through the ice sheet they get thinner and thinner while they are stretched in the horizontal direction. In the upper 70-100 m of the ice sheet the snow is compressed to ice. The stage between snow and ice is called firn, and the process where the snow is transformed to glacier ice is called firnification or densification. The firn layer is very thin compared to the total thickness of the Greenland ice sheet which is about 3 km in the central parts. 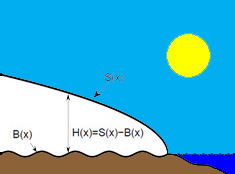 Ice sheet models are developed to simulate the flow and deformation of ice. Large three-dimensional models that require strong computers are used to investigate the previous and future extent of the ice sheet, while simpler and faster models are used to establish the relationship between depth and age at the ice core drill sites. 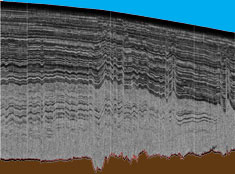 Radar soundings through the ice cap (Radar images collected over the Greenland ice sheet) reveal internal layers in the ice. These layers contain information on the flow pattern of the ice, the depth-age relationship, the accumulation rates, and the amount of basal melting over large parts of the ice sheet which are important for understanding the dynamics of the ice sheet.

The temperature of the ice influences the flow and deformation of ice: cold ice is stiff while warm ice flows easier. Furthermore, the ice has a very good "memory" of past temperatures so the temperature history at an ice core drill site can be estimated from the present temperatures measured in the borehole after the ice core has been drilled.